Joining in the Tradition of the Vendemmia

I think it can go without saying, that any culture which creates a specific word for an activity or object is openly declaring that this thing is important (very very important).

For example the word, vendemmia. This is the Italian word for harvest - and not just any harvest but the harvest of the grapes. Legend will tell us that it is a derivation of the word vendémiaire, from an antique language that was universally known in the medieval times.  It  referred to a period on the French or “revolutionary" calendar which was around September and specifically referred to the grape harvest. Though the Italians will likely differ on this story, preferring to consider it to be a pure discovery on their part from the latin word vinum (wine) e demia, (from demere, to take).

In any case, what we know to be true is that the Italians take this word very seriously.

But not so seriously that you can't join in at the spur of the moment and watch as the experts do their thing. If you are planning your calendar so that you are in the Tuscan countryside mid to late September, then you will be delighted with the number of smaller farms and B&B where you can appreciate up close the intricate work that goes on behind selecting the grapes and bringing them to fermentation. When you reserve your stay be sure to ask about following the "vendemmia". Though the owners can rarely guarantee when the harvest will be, if they know you are interested then they know to invite you when you arrive. You can also check out this link which lists several vineyards that are open to the public during the "vendemmia." 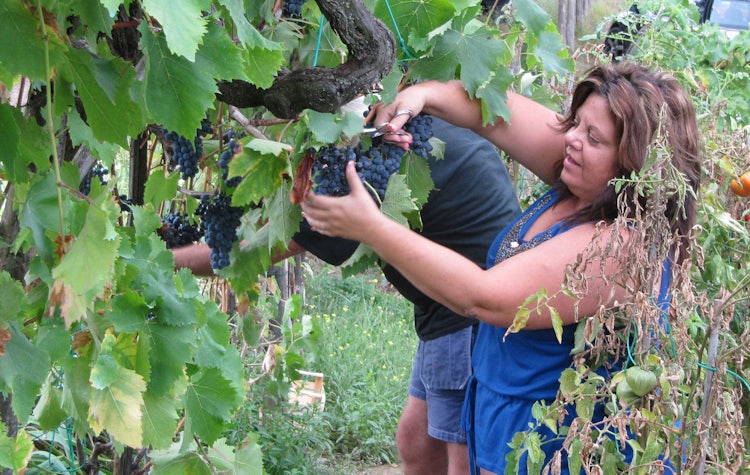 The Vendemmia Surpasses all Boundaries

The need to process the grapes before they shrivel into hard little rocks supersedes political opposition and rival soccer teams. Nothing is sadder for a farmer than to watch his grapes spoil on the vine, and though some wines call for grapes that have aged (on or off the vine) to produce the prized vinsanto, the major part of the harvest is destined for a table wine to be shared among friends.

The large, more industrial, vineyards will have a series of controls in place to decide when it is necessary to begin the harvest. Carefully calculating the proportion of sugar and acid there is in the grapes so as to guarantee the perfect conditions for the actual fermentation  process. However, the smaller vineyards do a bit of a haphazard guessing. 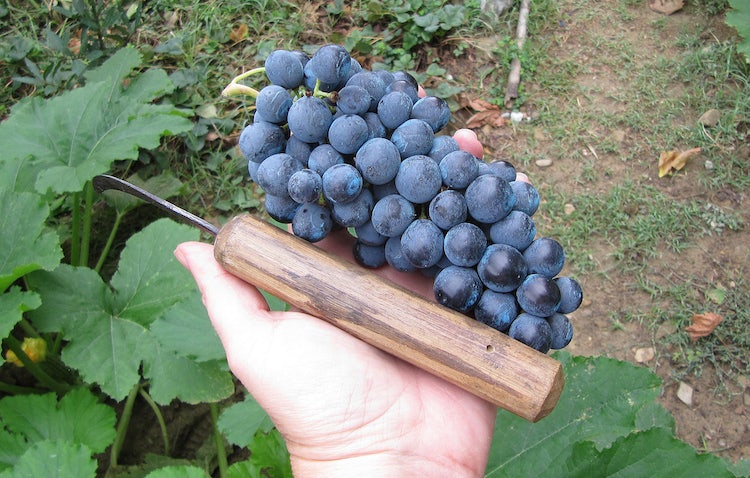 The actual harvest requires very little in the way of tools:  a sharp pair of garden shears or a small knife with a hooked point, a small to medium sized wicker basket, a few larger plastic bins, in our case a large wooden pole, a customized grinder and of course, large stainless steel vats.

Did I mention manual labor? 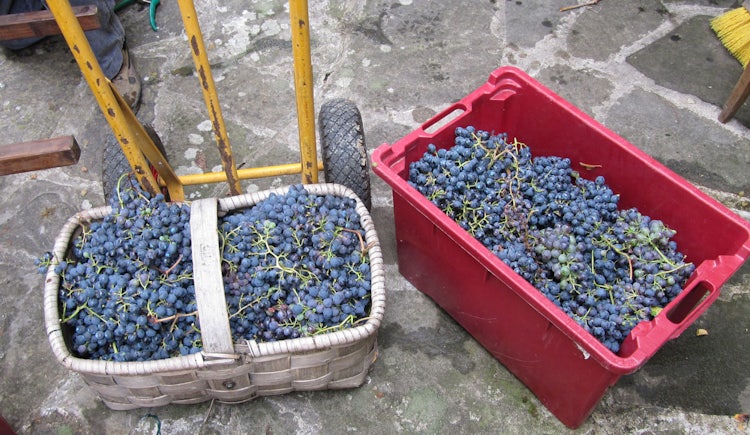 The grapes are transferred to a tall plastic bin and as soon as there are enough, they are pummeled with a wooden pole to initialize the breaking the skins - and finally the fermentation can begin.

There are many home grown solutions to the “breaking” of the skins and they are all valid, as long as it gets the juices out of the skins for the sugars to start their magic and feed the yeast so the juice turns into alcohol (wine). On a more commercial level, they have a large stainless steel vats with a corkscrew-like blade turning in the bottom which will move the grapes and gently break the skins while starting to separate the grapes from the stems. 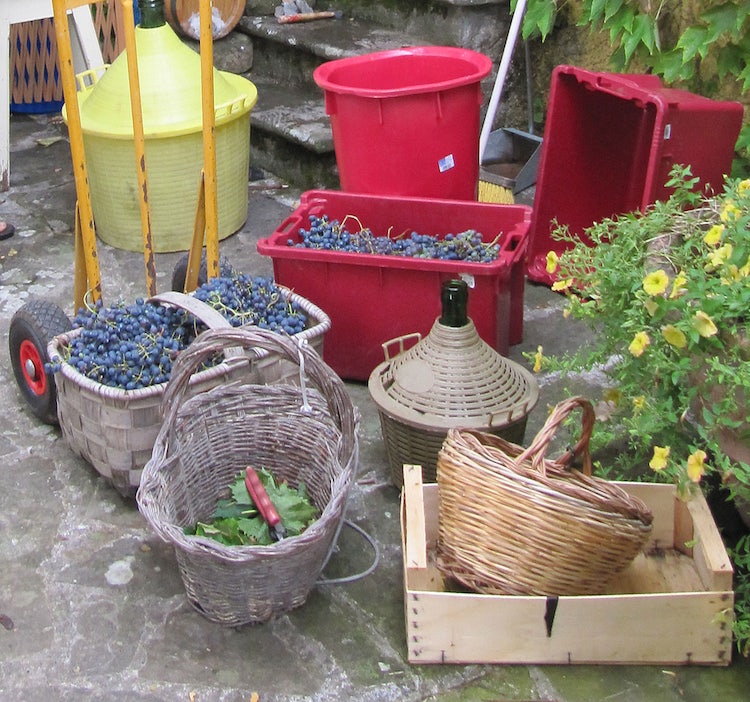 It all Goes in the Pot

It isn’t always practical to separate the grapes from the stems for a small (home made) production but the larger vineyards will do this before beginning the wine making process. Though some of the larger producers are experimenting with leaving the stems for longer periods with the idea that more tannins will give a crisper flavour, in most cases they prefer to transfer this flavor with the use of aging in the barrels and barriques (small wooden barrels). The "little" guy doesn’t have much of a choice - the removal of "i raspi" is a complicated procedure and thus leaving them in has become one of the defining flavors of a "small, local" production. 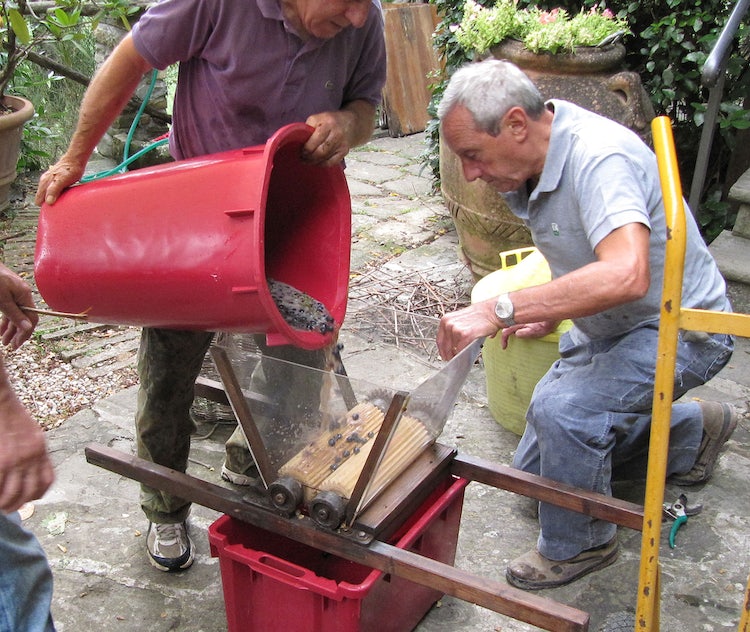 The semi-final product is then stored in large stainless steel vats until they stop "bolle" or bubbling. This basically means that the yeast has eaten all the sugar and the fermentation process is finished. Normally we are talking about a short period of time before the product is then transferred to a "damigiana", a large round glass bottle covered in a protective straw layer where the wine will sit until it is ready to be put in smaller bottles (750ml). The bottling process for a home grown procedure is normally done on a "need to drink bases".  Which means, when you need a bottle of wine, that is when you move it from one bottle to another, simply to make it easier to pour. 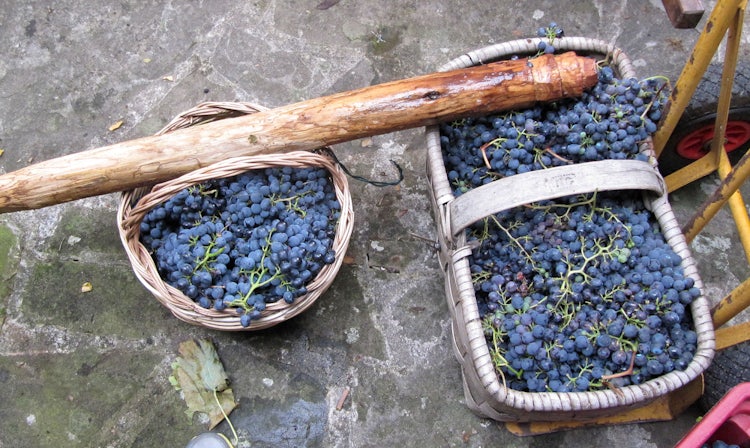 The Fun and Folklore

Contrary to popular belief, the picked grapes are no longer "stomped", even if the image is folkloristic, the truth is it is "poco igenico" ... ummm, not very sanitary. However, the "pranzone" or large lunch and comradry that are also associated with these events is still very much in vogue! After a morning of harvesting, pummeling, pouring and turning there is sure to be an invitation to sit down to a table that overflows with the colors and flavours of the season! 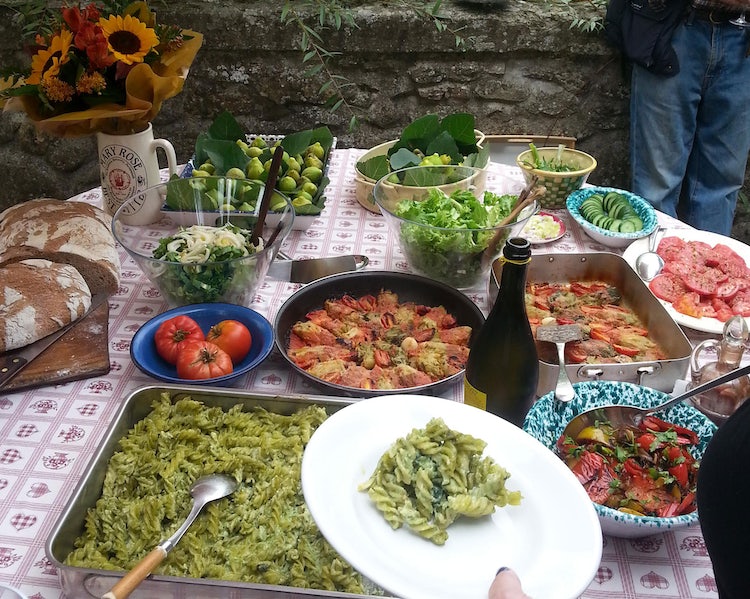