An Easy & Panoramic Drive from Florence

In less than thirty minutes and only 15 kilometers from the city center of Florence, it is possible to find yourself on the edge of Chianti Classico exploring the lively Tuscan town of Impruneta. It may not be part of the traditional Chianti circuit - but it does have at least 6 good reasons to make sure it is your first stop into the winemaking region.  Besides being centrally located for holiday apartments in Tuscany, it has lovely views of the surrounding countryside especially the many olive groves.

Though studies have yet to give a definitive date, archeological finds have brought to light both Etruscan and Roman artifacts which demonstrate that this area has been well known even in the early years. However, it isn't until much later that this area grew in importance which has left an indisputable mark upon Tuscany – and the world with is artistic terracotta creations. 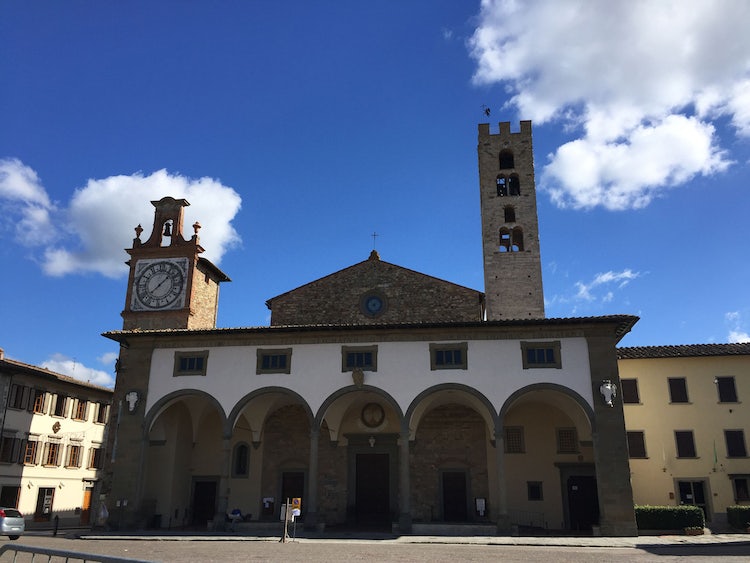 Growth Around the Virgin Mary Cult

The name Impruneta is derived from a Latin word meaning "within the pine woods"; this comes from the nearby area where a painting of the Virgin was discovered.  According to the locals, it was painted by St. Luke the Evangelist himself from before 84A.D. This image arrived in Florence with St. Romolo during the beginning of Christianity however when the persecutions began it was buried in the nearby forests to protect it.

It is told that when the locals wished to honor the Blessed Mother and build a chapel, the walls built during the day "came apart" at night.  So the legend tells us that the stones were finally loaded on a cart to relocate; miraculously the oxen fell to their knees at the very spot where the image was buried.  From that time onwards the area of Impruneta has gathered a notable and important cult for the Virgin Mary.

A circular route starting from Florence could easily include:
Impruneta, San Casciano, San Donato, Castellina, Panzano, Greve in Chianti, and back to Florence

Driving Time: 2 hours and 30 minutes (not including stops)

A circular route starting from Siena could easily include:
Castelnuovo Berardenga, Gaiole, Radda, Panzano, Greve in Chianti, Impruneta and back to Siena

Driving Time: 2 hours and 50 minutes (not including stops)

Home of the Buondelmonti Family

This area and the city of Impruneta was once the fiefdom of the Buondelmonti Family, the very same which is said to have had a significant role in promoting the Guelf and Ghibelline division.   This struggle between factions, which tormented the Florentine population for centuries, is said to have its origins when Buondelmonte declined to respect the marriage contract with the family Amidei and married another bride.

This insult resulted in a bloodbath on Ponte Vecchio in 1216 and became the perfect excuse to exacerbate an already existing conflict between those who supported the Imperial Ruler and those who backed the Pope.

The town was severely damaged after the war, and the present day architecture is not one of a medieval hamlet.  However, it is very lived by the locals and the main square in front of the church frequently holds concerts in the summer. There is a nice little restaurant on the square (la Loggettina, via Cavalleggeri) which allows for outdoor dining, even in cooler weather. You can also check out the little bar which is frequented for happy hour (I like the one that looks onto the square next to the bike racks because it is a great people watching spot). However, for the best pastries I suggest Pasticceria Leonardo on Via Paolieri. 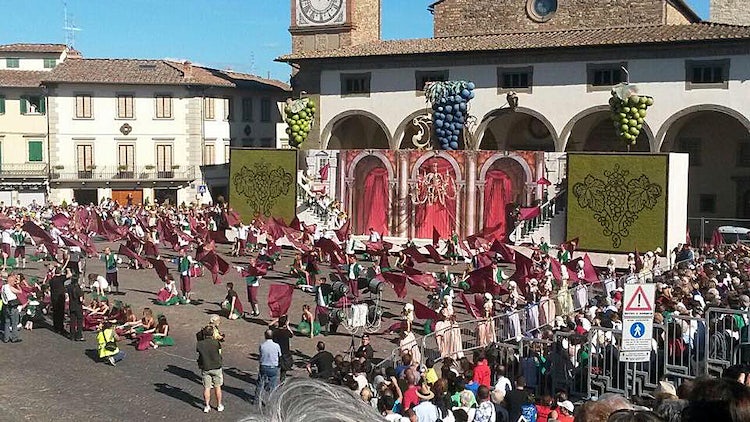 The town centers around the main square where the church is located and if you were to stroll around you will find there are two main roads that connect and form a “V” (via Cavalleggeri and Via Paolieri.) The community organize many festivals and fireworks all year long, but perhaps September with the wine, Festa of St. Luke in October and the olive harvest is the best time to visit the town, check out the calendar and make plans to enjoy one largest market areas and activities.

What to See In Impruneta

1 - The Basilica of Saint Mary in Impruneta

This church is a testament to the grand “Marian” following that is present not only in Impruneta but all of Tuscany. Originally it is believed that the parish church is located over an ancient devotional site of Etruscan times (6th century BC) but the structure you see today has been completely rebuilt. The town of Impruneta was an important pilgrimage site during the Middle Ages and even the Medici family were active in supporting the cult and icon of the blessed Mother with Child. Unfortunately, the church was severely damaged in 1944 when it was bombed during the WWII.  The careful restoration of the church has left it very similar to its the structure from the 1300's. The locals spent months sorting through the rubble after the bombing looking for and preserving much of the artwork and original architectural elements. Though restructured, the interior is definitely worth a visit, simple yet elegant. Click here for details on visiting the church. 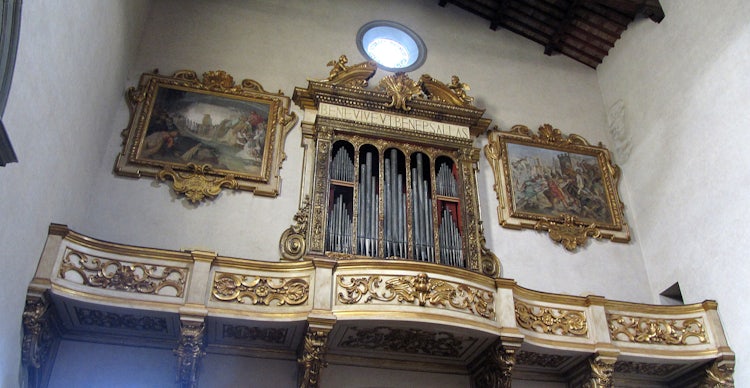 2 - The Treasures of St. Maria in Impruneta

A little known fact about Impruneta:

the little corner in the town square, on the opposite side of the church, in a "salotto" (little sitting area) of green tiled cotto is a mass of "elemental copper" found in the area weighing in over 500 ;kg embedded in the pavement under glass. Though no longer mined, Impruneta is one of the few areas where copper can be found in its purest form.

This local museum houses many important items including paintings, artwork and antique books.  But one of the more unique exhibits is (what is thought to be) one of the oldest-known pieces of European patchwork.  The, so-called, Impruneta Cushion, dates from the late 14th or early 15th centuries. The cushion was discovered after the bombing when a sarcophagus in the church was destroyed; records show that the patchwork pillow was the resting place for Bishop Antonio di Bellincione (born 1439-1477).  Please note, that at the moment the Museum is temporarily closed to the public. 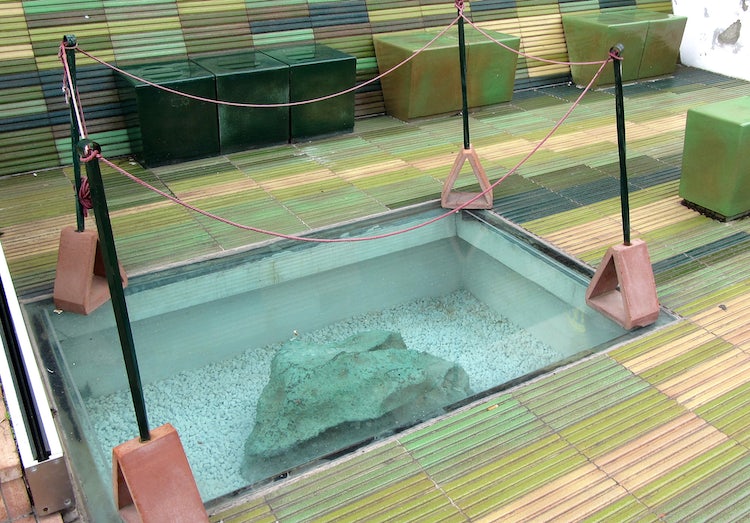 3 - Another interesting visit are the “galleria filtranti”

Located underneath the city center and built in the late 1800’s when Impruneta was desperately seeking alternate water sources, there are over 150 meters of tunnels carved out of solid rock which collects underground water as it drips off the walls and then sends it to a well which the villagers could draw from. Rediscovered quite by accident, a group of local examining maps petitioned the government to explore the underground tunnels.  Normally the visits are free however, they do ask for a donation to maintain them. The entrance is the manhole covering, where you will climb down 15 meters to walk the main tunnel.  It is located on via Cavalleggeri and they are normally open for town festivals - so September & October are a good months to visit them. 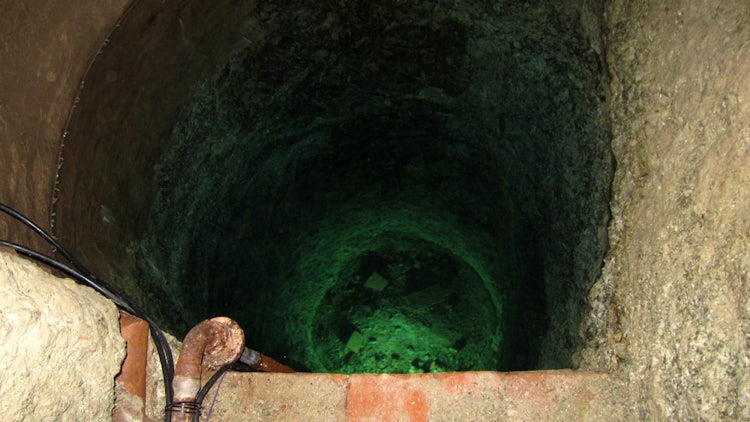 If you are visiting from mid October till December, you can make a small detour to one of the many "frantoio" that are in this area and watch as the locals bring their olives for pressing.  You can watch as the olives are unloaded, weighed in, then dumped in the bin to be cleaned and carried into the pressing area.  There are three phases:  a first press into a thick chunky paste, a second "press" which chops it up a bit finer and then the separation from paste to oil.

Though some olive mills like to "show off" that they still have the stone press, with todays technology, everything is pretty modern...but jus as amazing to watch.  No need to make an appointment and you will know if they are pressing because there is a constant coming and going of vehicles load with olives.  P.S. Just the perfume of the olives makes this stop worthwhile. 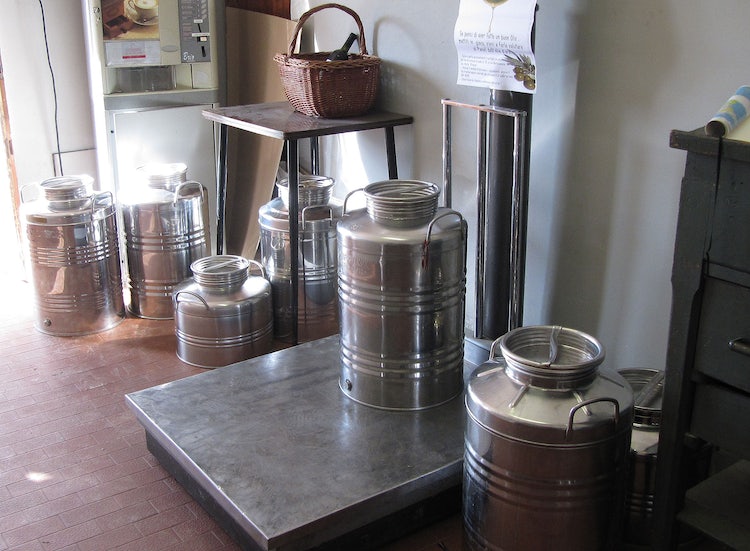 5 - Nearby is the Florence American Cemetery and Memorial

An American monument in Florence which honors the fallen during WWII. It covers almost 70 acres and is the final resting place for over 4000 men who gave their life in Italy, predominantly after the capture of Rome in June 1944. Above the garden area, lined with white stones markers, there is an atrium decorated with marble and mosaic which serves as a forecourt to the chapel. The north atrium displays marble operations maps recording the achievements of the American armed forces in this region. Open to the general public. For more information please refer to the official site. 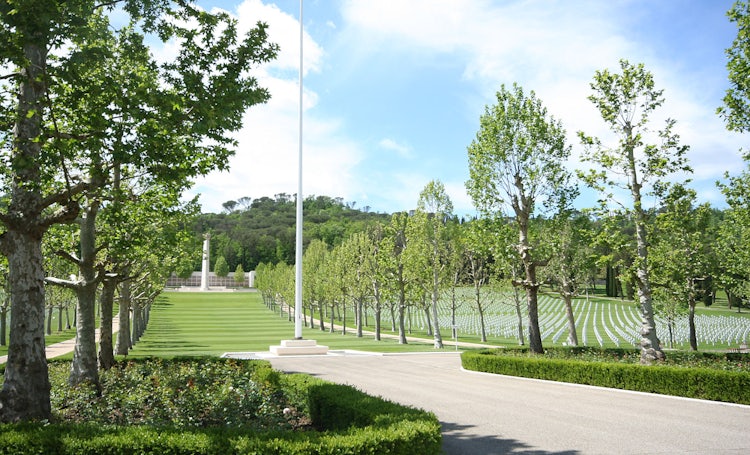 6 - And then there is the terracotta; Impruneta cotto is world famous.

The dirt that is found in and around Impruneta is particularly suited to creating a strong and durable clay which is then placed in kilns to acquire the characteristic burnt orange coloring. There are three important "fornace" (kilns) which still follow the age old techniques (dating back to 1098).  Though we encourage you: don't stop with these, there are several in the area. Sme of the more well known on the international scene are Poggi Ugo, Fornace Masini and M.I.T.A.L who, in 2014, celebrated 100 years of working with terracotta.  These workshops are open to the public for both purchases and visits. You can see how the make the clay, form the vases and statues and then tour the kilns, some of which are hundreds of years old...and are still the very same kilns they use today. 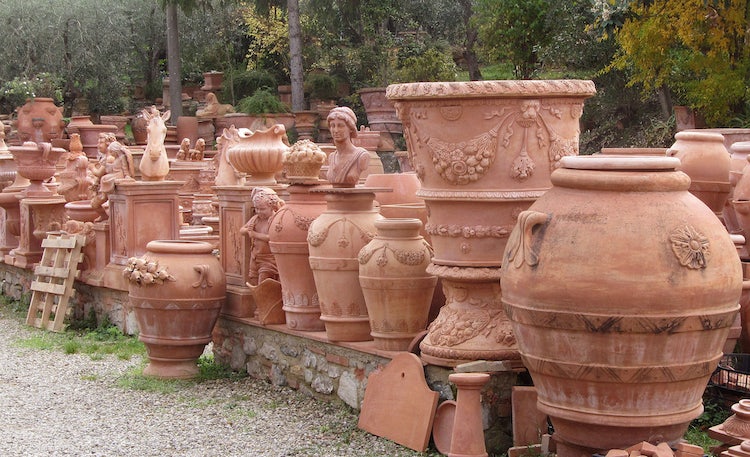 How to Get Here

If you are travelling by car from the city center of Florence, you will head towards Galluzzo and then the Autostrada. At the roundabout, take the exit with indications Impruneta.

If you are coming in from Siena, then you will take the Siena-Florence Raccordo, direction Florence Autostrada entrance. As the Raccordo finishes, it will take you to a roundabout, take the exit for Impruneta.

If you are coming from the Autostrada, then take exit Firenze-Impruneta. Once you have paid the toll you will come to a roundabout, take the exit for Impruneta.

If you are coming from Chianti, then head in directions Florence and follow indications for Impruneta.

There is ample parking in Impruneta, you can park in front of the church or only 70 meters after the church square there is a large free parking lot.

This is also where the buses come and go. Impruneta is also easily reached by bus number 366; Click this link for hours

You will find shopping, wine, local color and...