Radda in Chianti: The Capital of Chianti Classico

The Magical Spell of Landscape and Vineyards

What should you know about Radda?

Radda, also known as Ratti possible of German origin, and finally as Radda in Chianti, traces it origins to settlements to 2000 BC where archeological digs testify to a history of transitory inhabitants, perhaps the first shepherds travelling with their sheep from green area to green area, a tradition which was still used up to only 60 years ago. There are also many artifacts that speak of occupation after the fall of the Roman empire and a strong fortification of Etruscans, outposts from the area of Fiesole. 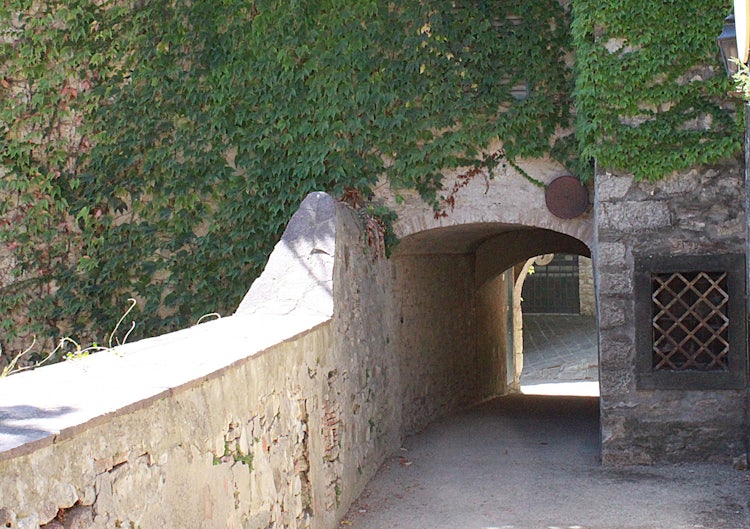 The medieval village and its castle were part of the fief of Count Guidi, though this did not offer much protection against the constant feuding and invasion from Siena. In the mid 1200’s Radda was established as the headquarters of the Lega di Chianti, long before they commercialized in wine...though records show this area was already exporting wine to England in the 1600’s and the Etruscan 2300 years ago had cultivated grapes for wine.

After the stunning loss at the battle of Montaperti, Florence established the Lega to create a military force for protection of their borders. 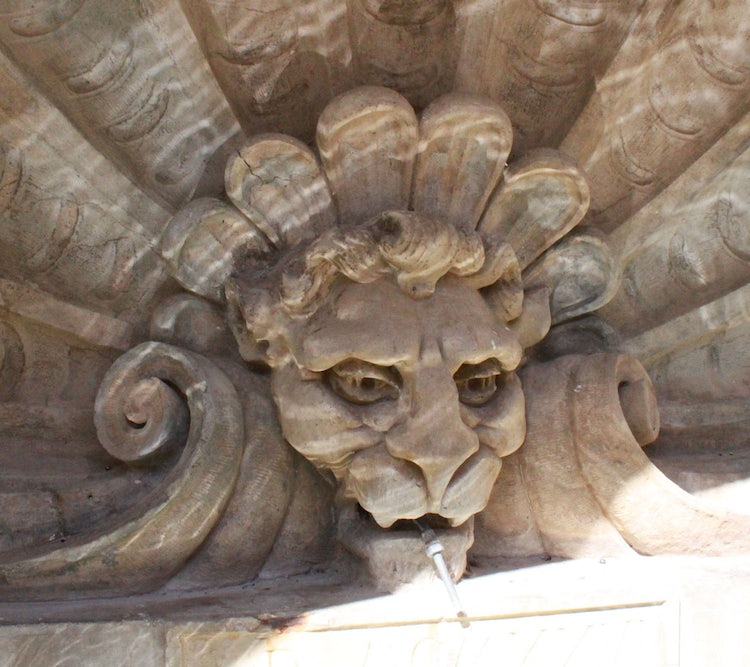 Castellina, Radda and Gaiole were grouped together and existed under Florentine rule, making Radda the headquarters for all three area. Florence sent Francesco Ferruccio, a feroce force, as Podestà in 1527 to reinforce their position, an event celebrated even today in Radda.

The peace did not come easily to this area until Siena was finally incorporated into the Republic of Florence, and there were many times that the strategically important town was threatened and devastated by invading troops. With the resolution of strife between this two parties the military importance of Radda disappeared and the eventual transformation of the castles and fortifications into villas and residences, which now characterize the landscape of Radda in Chianti.

The actual name Radda in Chianti is from 1911 in an effort to give an elevated value to the wine in production in the area. 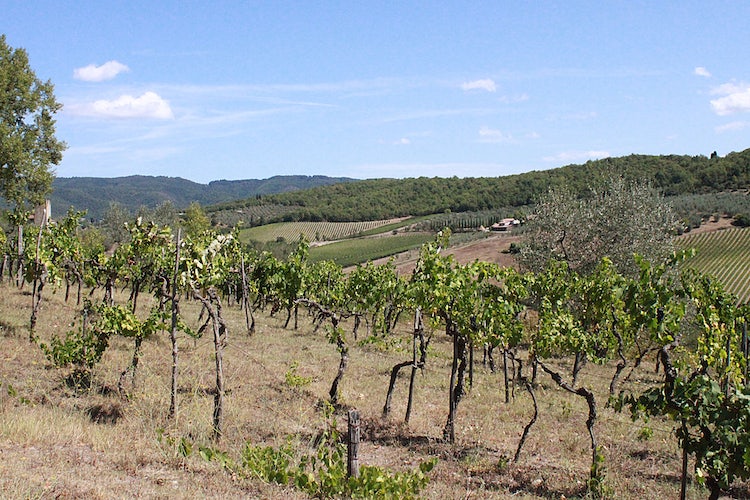 5 Things to See In Radda

why base yourself here...

» Close to Siena & Florence
» Perfect area for an agriturismo experience
» Easy day trips to Arezzo, Montepulciano and the Chianti region

It’s not the size of Radda in Chianti, or the wealth of historical sites that will draw you to this town but rather the suggestive atmosphere within its stone walls, its quiet little squares and the fantastic views of the landscapes that characterise this area. Thanks to the last invasion of Radda in 1478 much of the antique structures were pretty much devastated including the destruction of the castle. Not much has remained of the medieval era has been down to this generation in its integral and original form, though there are still pieces of the walls and towers to be admired.

The most visible traces of the town walls are those at the door of the town which face the public gardens. These are fairly easy to see, just park your car behind the city and you will already be looking at parts of the wall. They wrap around the city on either side. Entering from the gardens or Porta Fiorentina, will not change your itinerary...the town is just too small for this to make a difference. 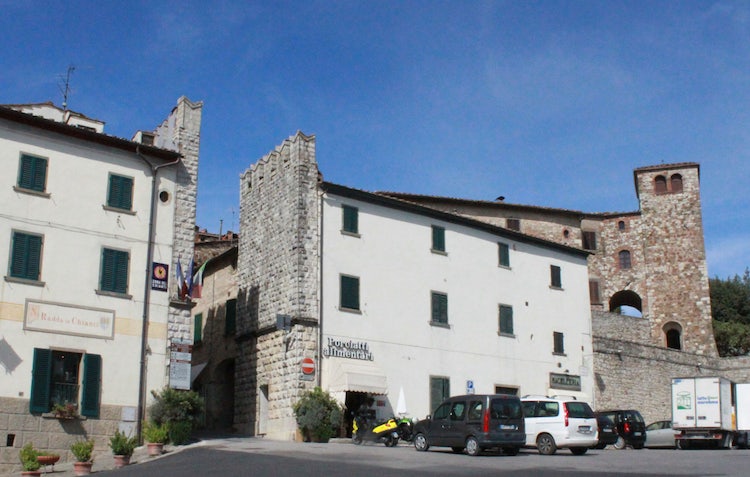 It was also completely destroyed in the invasion of 1478 yet quickly rebuilt. With the importance of Radda in the Lega, the municipal building or Palazzo del Podestà was enlarged several times to include jail cells and room for the Lega until the Lega in Chianti was dissolved in the late 1700’s. The walls within the covered terrace on the ground floor are lined with the shields from those who served as the Podestà and there is a legend in the corner which can help you identify the various ruling figures 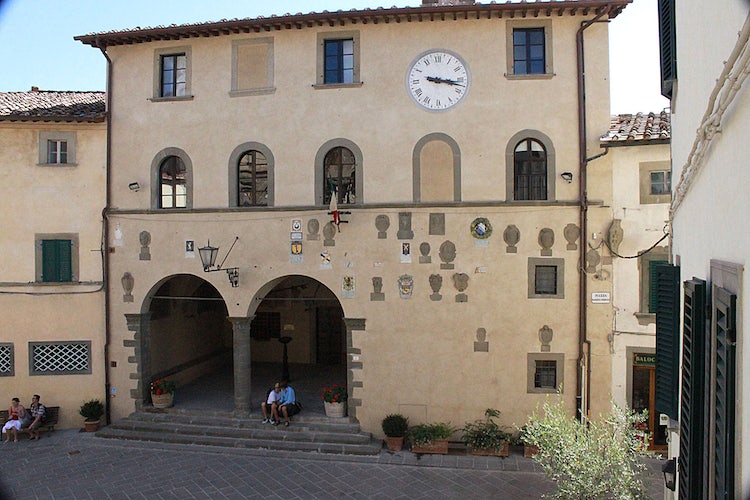 Across from the Palazzo del Podestà, looming above the small square with its fountain, is the Propositura di San Niccolò. There were some heavy interventions over the course of the years, however it fits in the square rather nicely creating a sensation of being enclosed in another time. The origins of the church reach back to at least the 1200’s however it was seriously damaged during WWII and restyled, leaving very little of the original structure. The bell tower was reconstructed in the 1950’s using one of the antique castles tower as a base, which you can probably appreciate better if you walk up to the tourist office where it is possible to admire the back of the church. 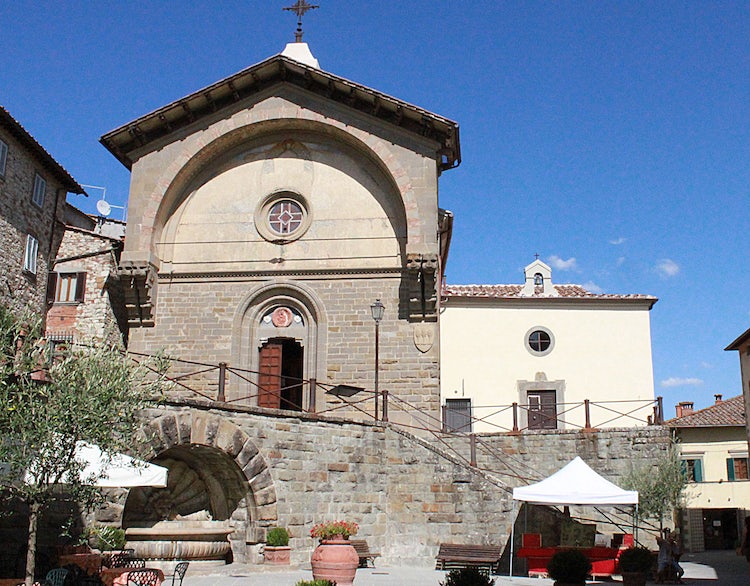 Walk around the small town following the cobblestone streets and "camminamento medievale" to enjoy the quiet and evocative atmosphere. Radda has done an excellent job of restoring much of the town back to its simple stone built origins, and especially in the tunnels where you will find a restaurant (al Bacco) and a charming little alcove with tables and chairs from the enoteca Casa Poriciati.

5. The Ice house of the Grand Duke

An interesting building is the ghiacciaia granducale, this was specifically built so that in the winter it would be tightly packed with snow until it formed ice, kept in a cool place it provided ice all summer long. Not only does the little terrace where you can see the peak of the structure have a stupendous view but it is nice cool in the summer months. (the position of the ice house was always in a cool spot to preserve the ice :-) ).

This small borgo or hamlet has been completely restored and truly speaks of of its origins and importance in the area. As one of the main defending structures together with the Lega in Chianti, it boasts defending walls, medieval towers and castle and a dominant panoramic positions. Well established in the area as the "viniferous well" you will find that Volpaia has a long history of winemaking, and due to its position for the travel of pilgrims, it also was, and still is, an ideal location for accommodations. 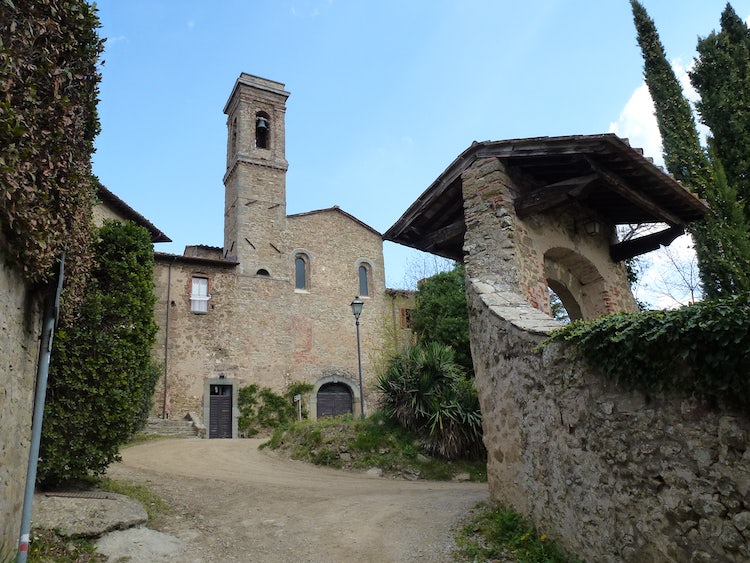 A visit here will include a visit to the restored Convent of Santa Maria del Prato and an in depth tour of the production of Chianti Classico. The careful and attentive restoration of has exalted the long history of the convent as the religious site while creating a space dedicated to teaching and sharing about wine and food in Chianti. The area, well documented in the early 1100’s has its origins in the miraculous image of the Virgin Mary and its importance grew as a point of pilgrimage. 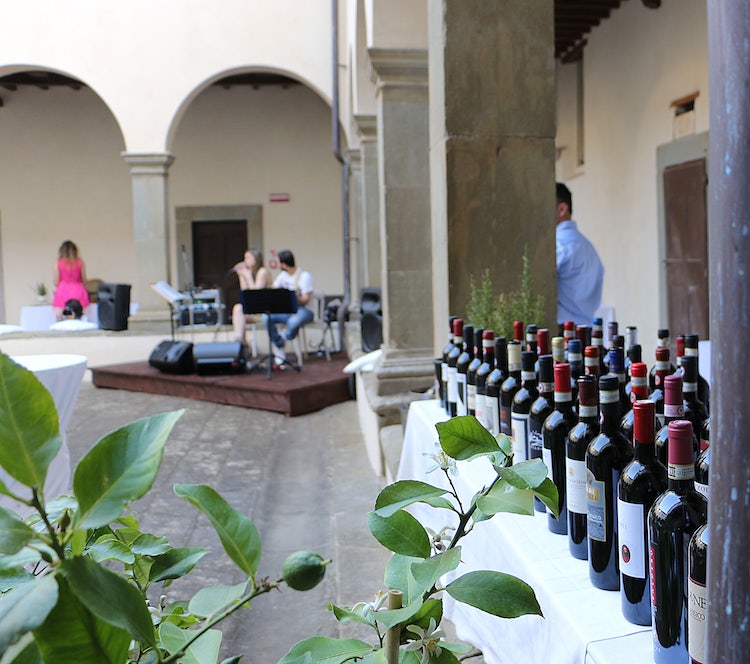 How to Reach Radda

Radda is an easy next destination after having visited Greve and Panzano. Shortly after leaving Panzano, the road will make a few tight curves, look on the left for road (well indicated) which will lead you to Gaiole and Radda. There are 11 km of of a quiet country road which will have you appreciating another aspect of Chianti: it’s cool, low lying forests. The abundance of greenery is one of the reasons why the soil is so rich and perfect for the cultivation of the vineyards. After approximately 9-10 km you will pass underneath a red brick arch and come to a round-about. Follow the indications for Radda - and you will be wowed by extensive fields of low lying hills covered with vineyards. 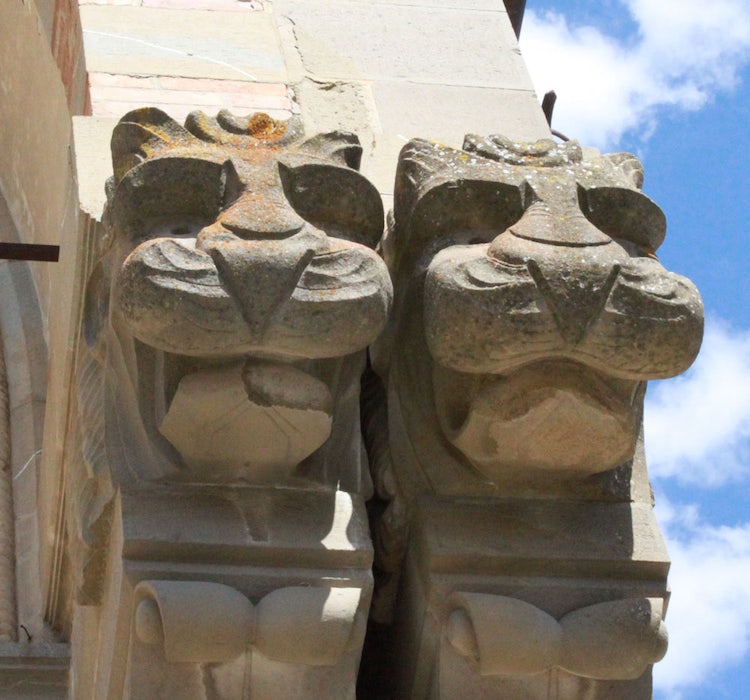 Buses are not as frequent as one would hope in this area, so from Greve in Chianti you need to catch the SITA 365A which will take you to Lucarelli a small little town with one of our top ten restaurants. You will then change buses for a for the Siena line S101 which will go first to Radda and then to Gaiole.

From Siena you will take the bus 125.

The parking in Radda is either on the main street or wrapped around the walls of the city. You will find paid parking right next to the public park area (complete with toys for the kids) and city walls (note that space is limited and tight, but convenient). There is also a public bathroom around the town walls. The tourist information office is in the Piazza del Castello: as you walk in from the public gardens you will see signs on the left hand side. 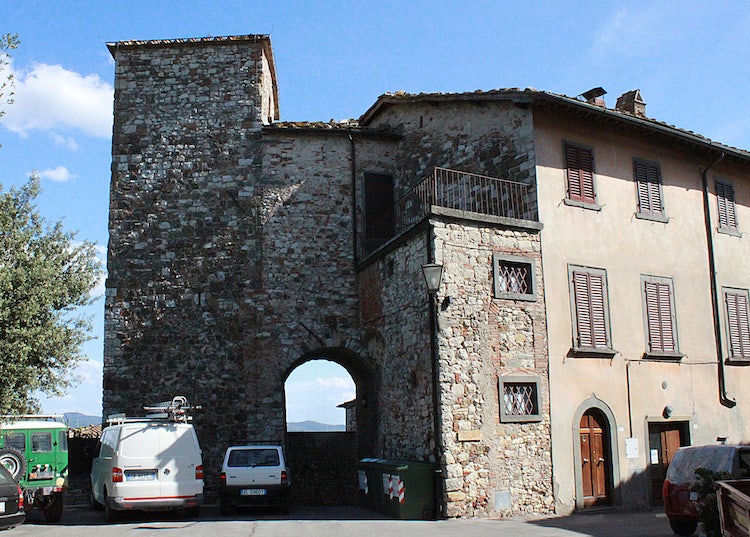 Even if you got the lay of the town covered, the town is small enough that I wouldn’t miss out on all the little vias and viales that it offers for exploration. For those of you who have decided to make Radda your base while visiting Chianti, you will find an inCoop food supermarket with easy parking before you enter into the city center and La Bottega SMA supermarket (a little smaller) alongside the main road (as opposed to in the town center). And if you prefer to shop the markets, market day is the 4th Monday of every month, however check out this article for other markets in the area during your stay.

Radda is a very active town, and the have many proposals including wine feasts, re-enactment of historical events and cultural activities. Check our list of events in Chianti to learn more. 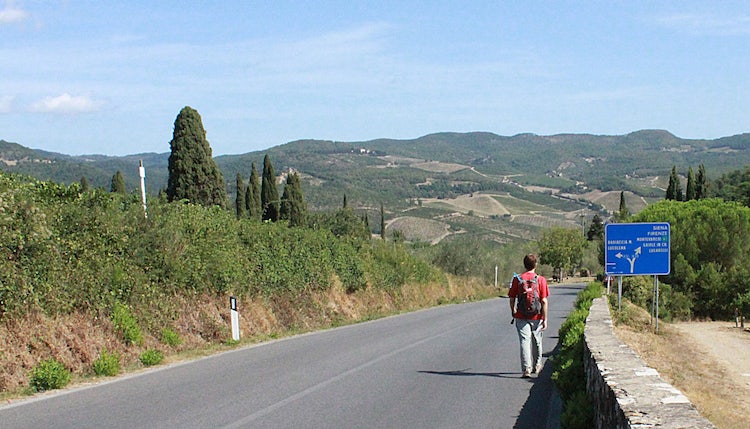 Tourist Office in Radda in Chianti

A selection of the best places where you can do taste testing &...