The untouched beauty of the landscape and hamlets of Chianti

What is the story behind San Donato?

San Donato is a small medieval village at the top of a hill minutes from the Firenze-Siena roadway about halfway between Florence and Siena. This is Chianti territory and the roads that take you to San Donato and then on to Greve or to Castellina in Chianti are some of the most beautiful in Chianti, with the rows and rows of vineyards as far as the eye can see mixed in with olive tree orchards, small woods, hamlets, farmhouses and wineries. 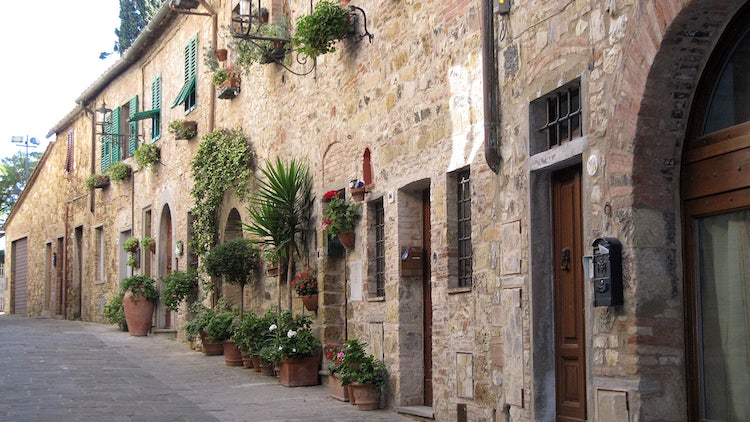 The town is small but it still conserves its medieval heritage. The heart of the town is still surrounded by the defensive walls built in the 12th century and along the western edge a watch tower still stands. We learned that for its small size, San Donato has played an important role in the centuries-long struggle between Florence and Siena.

why base yourself near here...

In 1218, the town came under the power of the city of Florence. Its importance then grew as it became a stop along the road from Florence down to Rome, and travelers coming into Florentine territory stopped here even to change their coins.

In 1176 and in 1265, two peace treaties between the republics of Florence and Siena were signed at San Donato in Poggio. Just 5 years before the second treaty, Florentine troops had organized just below the town as they were preparing to march into the Battle of Montaperti.

The battle was a loss for the Florentine Guelphs and for this, the town and surrounding territory was ransacked after the battle. The peace treaty of 1265 did not last long. 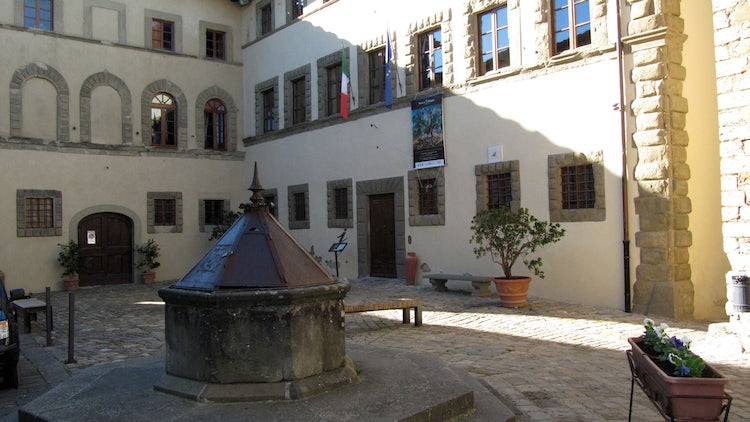 Toward the end of the 14th century, the main pilgrimage and economic road started to pass through the nearby Tavarnelle and Barberino and thus the town's importance began to decline.

What is there to see? 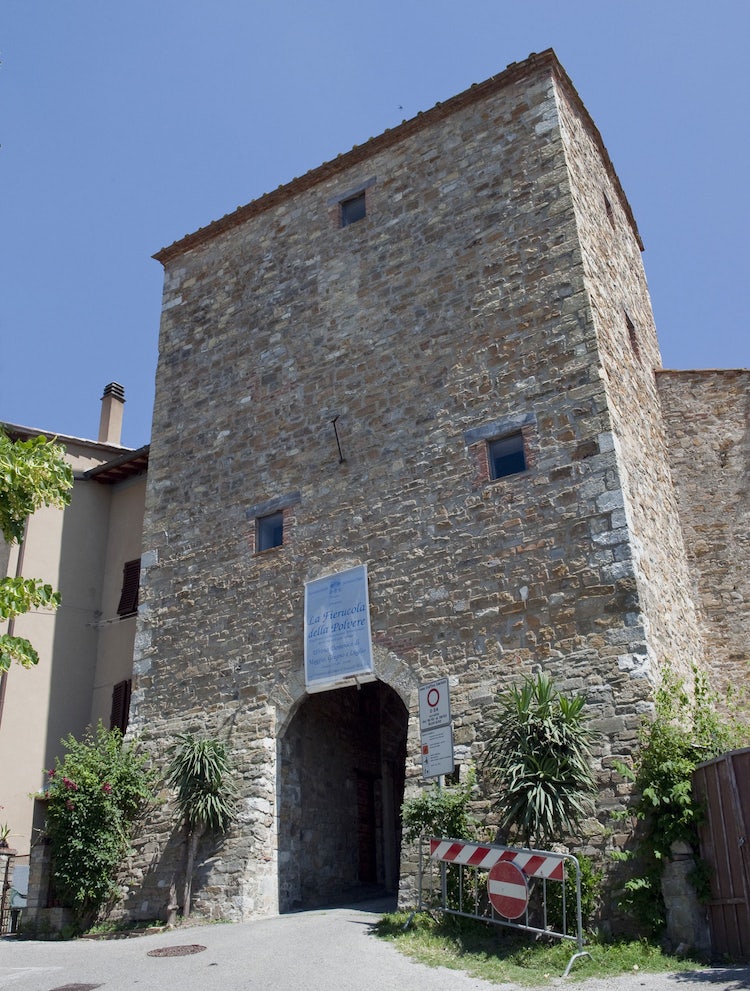 One of the principal entrances is through the northwestern "Porta Fiorentina" (since it leads toward Florence),which follows the main street, Via del Giglio, that has intersected the town since the 12th century. Besides the beautifully restored stone and brick buildings, you will pass a remaining tower-house from before arriving into the main square, called Torre Campanaria.

Here, the imposing Palazzo Malaspina dominates one corner and right next to it is the Gothic church Santa Maria della Neve with its side facing the square. In the center, the octagonal well reflects how important a well was as the town's only water supply when the town was under siege. On the other side, is the Palazzo Pretorio which has not conserved its medieval look and is certainly less imposing than the facing Palazzo Malaspina. 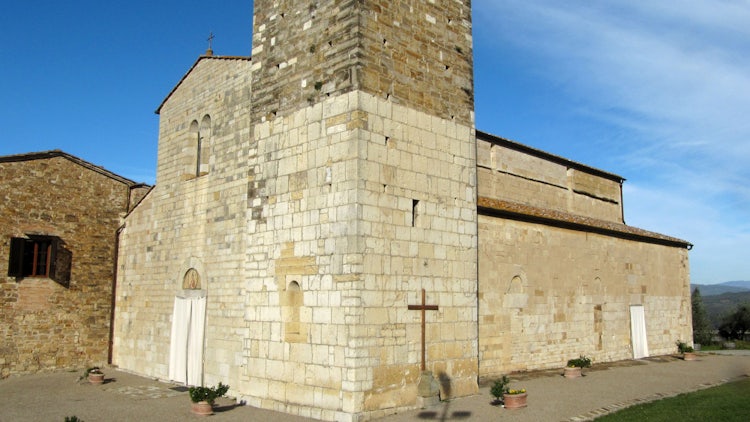 Making your way out of the eastern wall called Porta Senese you will come upon the main church of San Donato, the Pieve di San Donato. Built in Tuscan Romanesque style, documents date it back to the year 989. The baptismal font in terracotta and glazed by Giovanni della Robbia dates back to 1513.

Just a short drive away is the Observatory and Chianti botanical gardens, an unexpected but definitely a great stop (with or without kids).

They have several events during the course of the entire year - so watch their site for upcoming events and if you let them know (via email) that you are going, they will arrange to have one of their operatives there that speak your language.

The gardens highlight the natural fauna & flora of Chianti while the observatory has evening and night events to help you navigate the Chianti stars.  They are also the first of its kind to have a learning facility for the seeing impaired.

This museum highlights a private collection of the farming and peasant culture in the area. Divide into several rooms, each one is dedicated to a different aspect of the agricultural society with tools that are no longer in use: explore the antique world of carpentry, cobblers and blacksmiths as well utensils and tools from the homefront. A wonderful learning experience for young and old.  Check hours for Tourist Office. 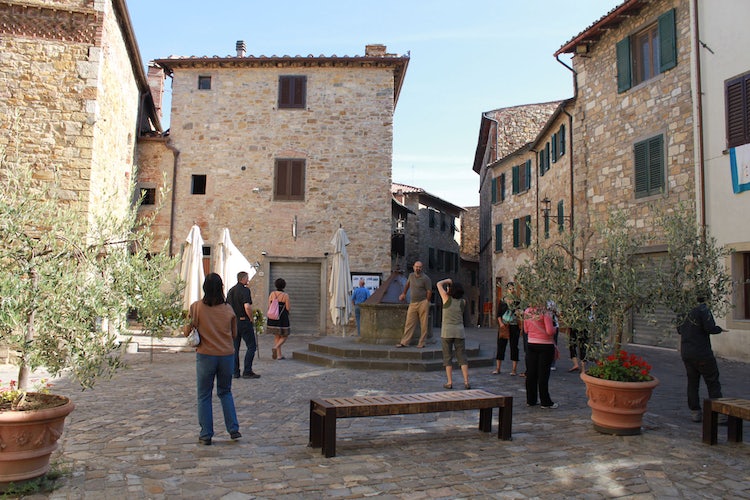 How to get there

Coming from either Florence or Siena, the easiest route is to take the main highway Florence - Siena and exit at San Donato, follow the signs to the city center. It is about 45 km in either direction...truly in the middle of these two major cities. Both San Gimignano and Greve in Chianti are only approximately 25 km from San Donato, making them easy destinations to combine on a day trip.

A practical guide on what to see and how to get to Greve in...

Our review of the Palazzo Malaspina B&B located the town of San...