The Romanesque Church of Sant’Appiano

A few kilometers from the historical center of Barberino Val d'Elsa, going towards the delightful village of Linari, is the beautiful parish Church of Sant'Appiano, often indicated as the oldest church in Chianti. I personally think that it's one of the most beautiful churches in the area because of its simple architecture and the tranquility one senses being within.

The church has Etruscan origins and became property of the Bishop of Florence in 990. In 1171, the bell tower collapsed and destroyed the right aisle. From the facade you can easily notice the rebuilt side as it is in red bricks, while the left aisle is constructed with small stones and pebbles. You can notice the same thing within the church with its three naves: the left arcades are in stone sustained by massive pilasters, while the right arcades are supported by red brick columns with flowered capitals in the Florentine Gothic style, a difference you will notice if you really look at the arcades.

The Gherardini Family and Monnalisa

The Gherardini family was an important noble family in Florence with ancient origins. In the Middles Ages, the family was liege lords in Chianti and Val d’Elsa. They also moved into Florence in the 10th century and actively participated to the city’s political life, as well as in the conflicts between the Guelphs and Ghibellines. This particular Florentine family has the distinction that the famous Monnalisa painted by Leonardo da Vinci was a Gherardini. Her name was Lisa Gherardini, given in marriage to Del Giocondo thus giving her the the name Gioconda. In Italian, the painting is often called La Gioconda.

In the left aisle, you'll find beautiful Renaissance frescoes by students in Ghirlandaio's workshop. The three frescoes depict The Martyrdom of Saint Sebastian, Saint Peter Martyr, the Saints Anthony Abbot and The Evangelist Matthew. In the opposite aisle are visible traces of a fresco dating back to the early 15th century.

Inside the church you'll also find the Chapel of the Assumption, frescoed in the 17th century with several Saints. On the opposite side is a valuable and impressive sepulchral slab of Gherarduccio Gherardini, dating back to his death in 1331. Going past the tomb you access the beautiful 13th century loggia that encloses the small cloister.

What makes Sant'Appiano unique are the ruins of the ancient Baptistery which sits in front of its facade. Built in the 4th century, it collapsed at the beginning of the 19th century and only four stone pillars were left standing. The capitals are decorated with early Christian symbols such as the Cross and the Lamb. 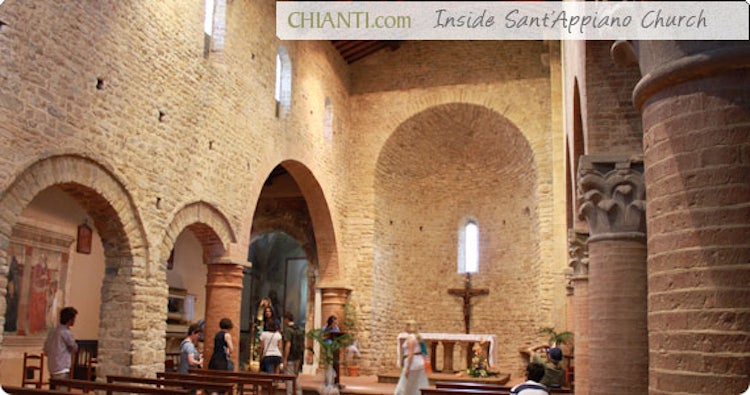 Next to the Church of Sant'Appiano you'll also find the Antiquarium, a small archaeological museum displaying several archaeological findings from the area. Inside the museum are several Etruscan funerary urns in alabaster with beautiful covers sculpted with the figure of the dead. There are also several pieces of pottery from medieval and Renaissance times, typical of Florentine manufacture. The most important piece in the collection is a small pagan idol in sandstone that depicts Eros riding an animal, found within the ruins of the baptistery in front of the church.

Barberino val d’Elsa in Chianti will charm with...