Discover the Secrets of Chianti Classico

The towns, the castles & the vineyards of Chianti

Only a few regions can offer such a beautiful and rich panorama as Chianti Classico: green hills sketched by miles and miles of vineyards and olive groves, ancient walled villages, panoramic curvy roads and historic castles and fortresses. Chianti Classico spreads from Florence to Siena and includes the municipalities of Greve, Panzano, Radda, Gaiole, Castellina and Castelnuovo Berardenga. 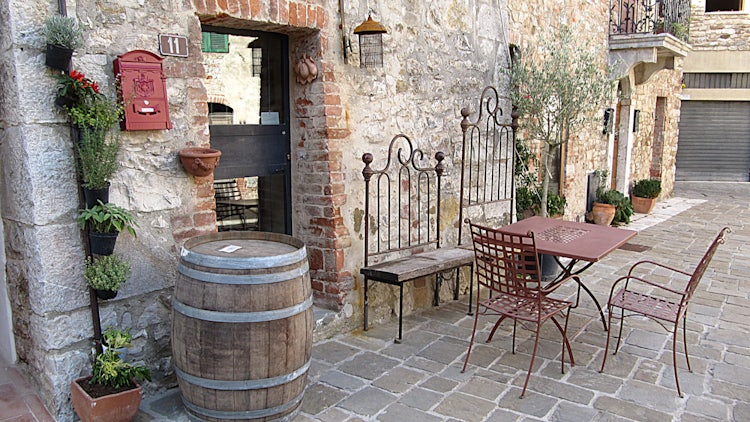 The mini guide below outlines the highlights of each town with several useful links to more detailed information. The driving time for the entire itinerary, starting in Greve in Chianti or Castelnuovo Berardenga (without any stops) takes about 1 hour and 30 minutes thus even if you include a few stops in the towns and for photos, it is completely do-able in one day.

However, you can always choose to make your holiday base in Chianti Classico and take more time to explore each and every one of these towns in a leisurely manner. We have a select list of recently reviewed vacation accommodations including villas, apartments, and B&Bs which are perfect for making a base in the heart of Chianti.

With more time-based in Chianti, you can include visits on the market days or explore one of the many museums and churches along the way. Be sure to check out the local events, there just might be something special that catches your eye - like wine festivals, sagras (food parties), markets and seasonal celebrations.

There are many towns and hamlets that are scattered throughout the area known as Chianti, however, this article refers to those specified in a zone called "Chianti Classico", the oldest and most genuine area in the Chianti region. 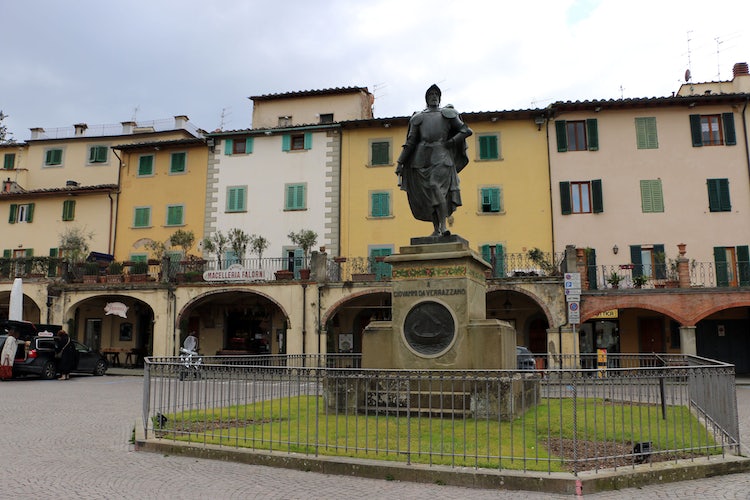 Our trip starts in Greve in Chianti, considered by many as the doorway into Chianti. This lively town is famous for its particularly shaped piazza or square which has served as a marketplace for the castles and walled villages in the surroundings since the Middle Ages. The square has a triangular shape and large porticos along all three sides that protect visitors from sun and rain while shopping.

In the center of the square, the bronze statue of Giovanni da Verrazzano dominates; he was an explorer that discovered the Bay of New York. At the top of the square stands the Church of S. Croce, originally a medieval church and long since remodeled according to the Renaissance Revival architectural style. Inside the church, you will find a few works of sacred art including the triptych depicting Madonna and Saints by Bicci di Lorenzo.

Greve features many different enotecas and vineyards where you can taste Chianti wine without a car and enjoy local food. The porticos are home to many workshops, wine bars, and restaurants. One that requires mentions is the Antica Macelleria Falorni, a historical butcher shop that sells only typical products produced in Chianti. 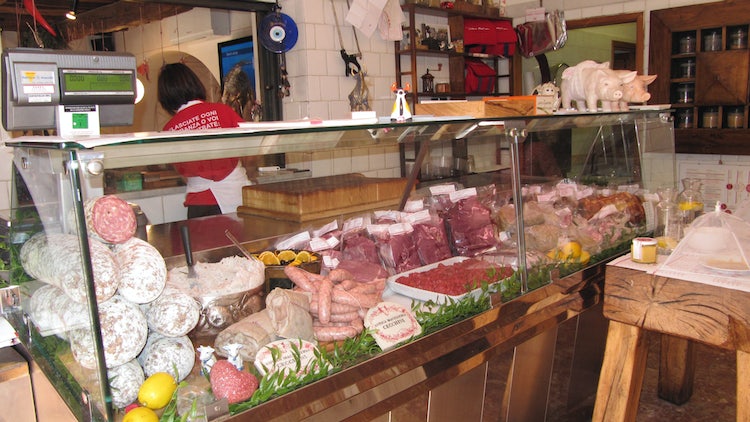 Often referred to as just "Panzano", this is the most populous town in Chianti and sits just a few kilometers south of Greve. Since the 12th century, Panzano played an important defensive role for Florence and the area it controlled. The Castle of Panzano was a fundamental bulwark for defending the Florentine Republic during the battles between Florence and Siena. The castle's structure can be still recognized within the older section of town including the Church of S. Maria which dates back to the 1200's, successively rebuilt in the 1800s in Neoclassical style.

It is really nice to wander through the old town, soaking in the atmosphere of times gone by and sitting in the main square drinking a glass of Chianti wine. There are several wine bars and restaurants in Panzano that offer wine tasting. A popular place to visit is the Antica Macelleria Cecchini, a butcher shop famous for its Florentine steak and where the owner is known to recite passages from Dante's Divine Comedy while serving customers.

Not far from the historic center stands the Pieve di San Leolino, an ancient rural church dating back to the year 982. In spite of the Renaissance exterior, characterized by the elegant "pietra serena" stone and portico, the church remains an exquisite example of a Romanesque basilica with three naves. Inside are displayed some precious works of art by local masters. 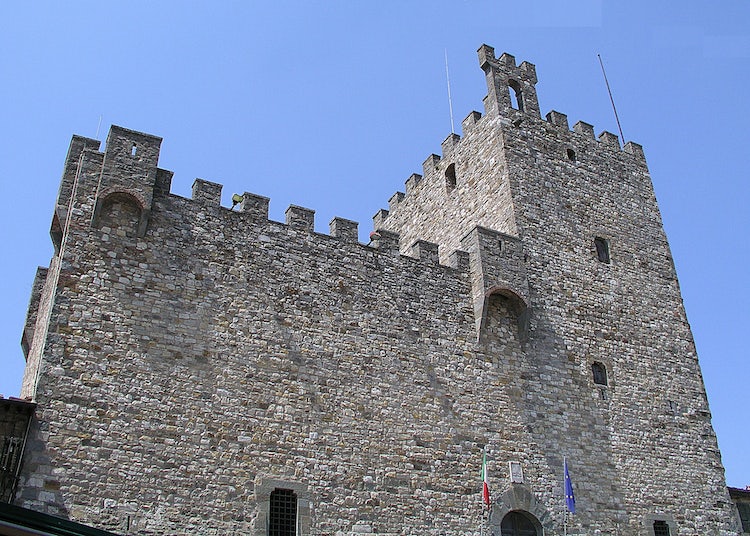 Moving towards Siena you'll reach Castellina in Chianti which dates back to the Etruscans, as attested by the Etruscan tombs of Montecalvario. In possession of a great position in the middle of the Chianti region, Castellina stands as a strategic headquarter between Florence and Siena. Confirming its glorious past, the massive Rocca (castle) stands proudly over the city and the impressive Via delle Volte, an underground series of roads that run around the city, offering breathtaking panoramic views. Walking through the small town you will notice many historical buildings that belonged to Florentine and Senese aristocracy.

The Church of S. Salvatore merits a visit; rebuilt after the Second World War, the church displays a beautiful late 14th-century fresco by a Tuscan master. We also recommend the Archeological Museum of Chianti Senese where many archeological findings from the Chianti region, and particularly Etruscan findings from Montecalvario, are displayed.

In Castellina, you can taste wines in one of its various wine bars and the great, unforgettable taste of its many fresh and aged salami and cold cuts which have become an age-old art in Chianti and Tuscany. 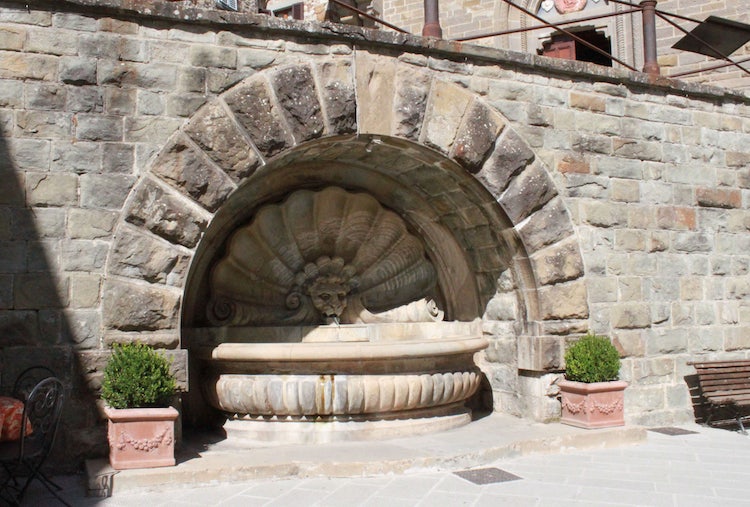 Leaving the Chiantigiana road and taking the SR429 you will find Radda in Chianti, which, even today, preserves its original medieval look. The ancient walls still defend the center and many maze-like streets. The Palazzo del Podestà overlooks the main square together with the Romanesque Church of S. Niccolò. The Palazzo was the headquarters of the League of Chianti for over four centuries, as confirmed by the many coats of arms on its facade. Just outside the center stands the ancient Franciscan Cloister of S. Maria in Prato.

It is really nice to get lost in Radda wandering around its medieval streets, perhaps indulging in a glass of wine while looking at the spectacular panorama of the vineyard-covered hills that surround the town. 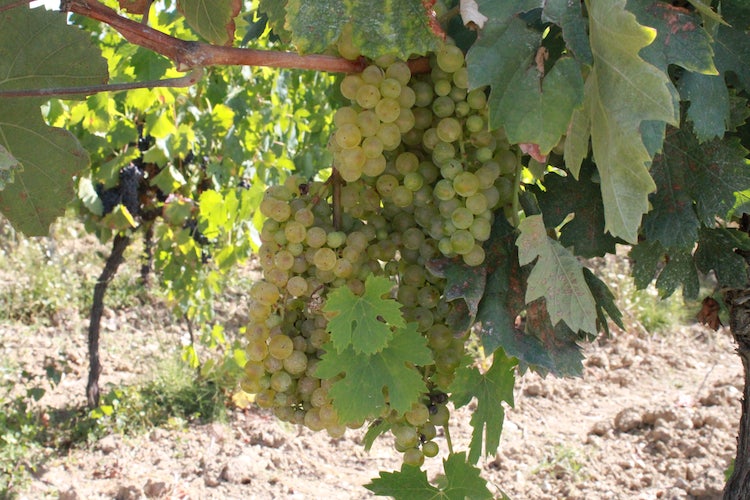 Near Radda stands the Castle of Volpaia, an ancient walled town which we recommend visiting. The castle in sandstone has a distinctive dark color that makes it different from other castles in Chianti. In spite of the marks of the numerous wars between Florence and Siena, the main structure can easily be recognized in the massive tower and one of the minor towers. We suggest a stop at the Commenda of S. Eufrosino, a 14th-century church transformed into a wine bar. Today the Castle of Volpaia is a small tourist town where you can experience the ancient culture of wine. 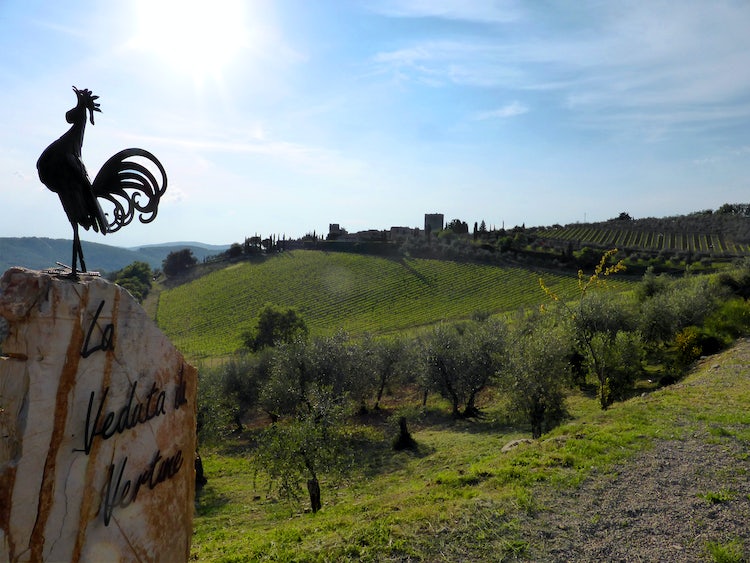 Not far from the Radda and the Castle of Volpaia stands Gaiole in Chianti, another town dating back to the Middle Ages. Gaiole was an important marketplace for the castles in the surroundings because of its position between Chianti and the Valdarno (Valley of the Arno river). It was also one of the three original strongholds of the League of Chianti in the 1300's. Gaiole is still an important point of interest in this area with wine and art festivals in the main square.

There are several castles and fortified towns around Gaiole that deserve a visit. For example, the Castle of Vertine, the Castle of Meleto, Pieve of Spaltenna and Castello di Brolio can be visited, look into a special wine tasting and winery tour. 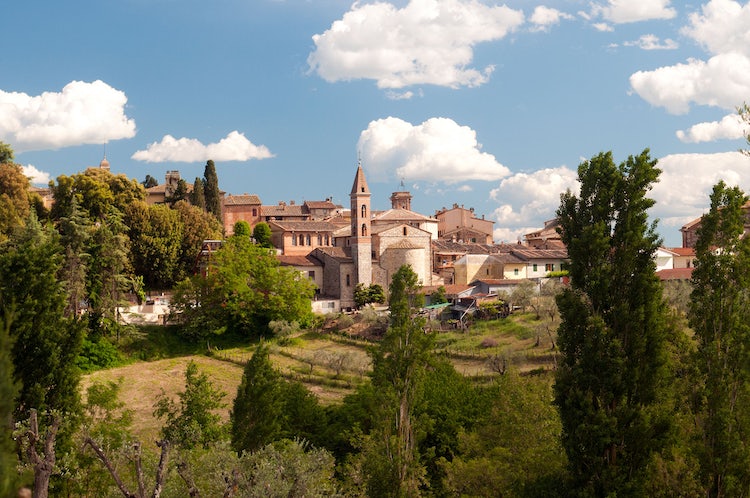 The southernmost tip of the Chianti Classico area often gets lost in the excitement of the first few towns. However, it offers many surprises. Castelnuovo Berardenga, founded in 1366, was located on the border between Florence and Siena. Built by Siena, it remained under their control until 1555, when they were defeated by the Medici Family. You can see the remains of the high tower in Piazza Petrilli transformed into the city's clock tower in 1755. The town square is a large open space that invites you to enjoy the tranquil and enchanting atmosphere or the suggest alleyway called Vicolo dell’Arco with its characteristic red brick arches.

Just outside of the town borders you will find the enchanting town of San Gusme, and some lovely photo opportunities of a little town which seems to have been lost in time. The Certosa of Pontignano merits a visit, not only because it is a stunning monastery structure for events, but a curious piece of history: it served as a refuge for Jews and political dissidents during WWII. Be sure to add Pieve a Pacina, less than 3 km from the town center, perhaps one of the oldest churches in the area - it most certainly existed before the year 714! 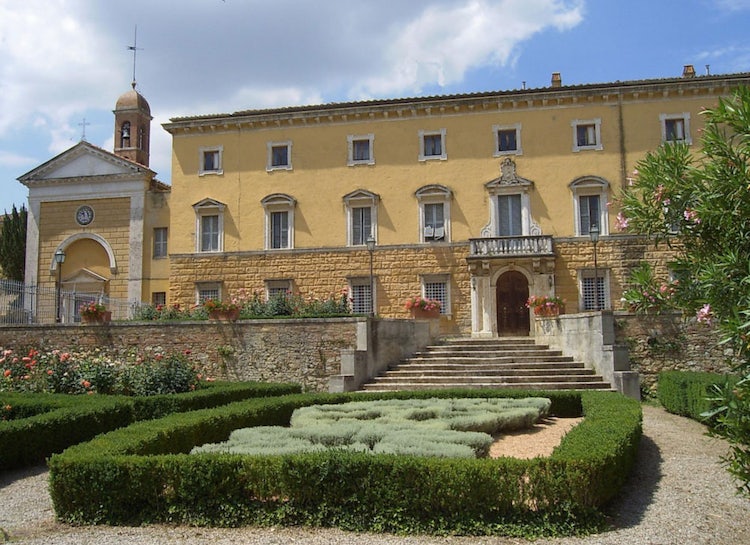 Nearby is the Villa Chigi Saracini, built in the 19th century and surrounded by a beautiful Italian Renaissance garden and an English landscaped park. A little less traditional, but just as interesting is the contemporary works of art set in the Chianti Classico great outdoors; the pieces blend and create a dialogue with the surroundings at the Chianti Sculpture Park.

Chianti Classico promises a wide array of photo possibilities and, of course, wine tasting opportunities. Take your time navigating the roads between one town and the next and stop at any of those intriguing signs that say “vendita diretta” which means they sell directly to the public. 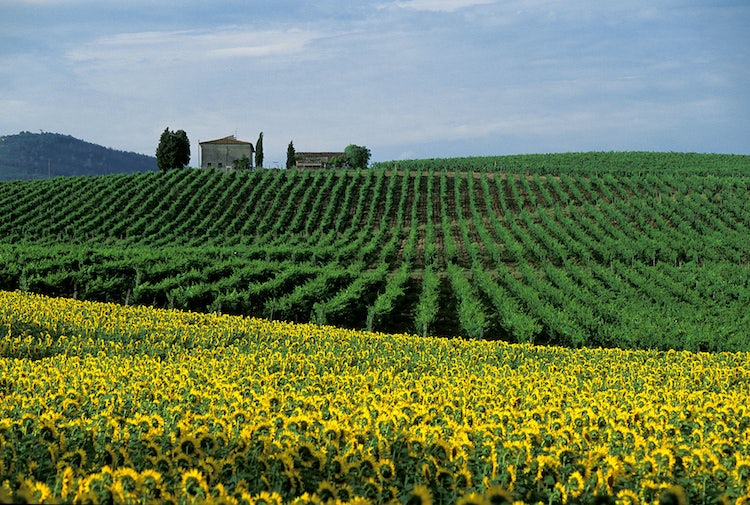 I'm from California but have called Florence my home for over a decade. I love to explore Italy; it is a lot of fun to try to see everything like I'm seeing it for the first time, keeping you, our readers, always in mind. I enjoy sharing what I know and helping others as they make their travel plans for Tuscany through our Forum. If you have itinerary-related questions, please post them there!

Poggibonsi in Chianti, is a small Tuscan hamlet...