A Map of the Chianti Region in Tuscany

It is very hard to give precise borders to the Chianti area in Tuscany. This is because the name of Chianti is traditionally refered to the area between Florence and Siena where Chianti wine has been produced and not a definite territorial area with boundaries. With time, the area where Chianti wine is produced has grown. 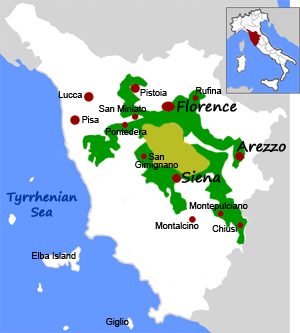 Parts of these areas, excluding Impruneta, grow the grapes that are transformed into "Chianti Classico DOCG" wine. If we go beyond the "Classico" area, Chianti wine has a total of 8 denominations, such as Colli Fiorentini, Colli Senesi and Chianti Rufina, to name just a few, that further extend the territory of Chianti as can be seen in this smaller map to the right.