On the Road between Florence & Siena

The position on the Roman crossroads made it easy for San Casciano to prosper economically until well into the 1400's. It's strategic position made it one of the more popular stops on the road to Rome. The findings of Etruscan and Roman artefacts have definitely dated the city - and have explaind the original name, San Casicano in Decimo - referring to its position at “milemarker” decimo on the Roman road between Fiorentina and Sena Giulia. The “decimo” suffix was lost over time and replaced with a reference to the valley and river val di Pesa (sometimes written as San Casciano VP).

Like so many towns that spurted up along the Florence border, it was considered a strategic military outpost, protecting the medieval city of Florence from invasion. But San Casciano didn’t start life that way; it was a classic market town set low in the valley and thus it grew-up with hardly any defenses making it an easy target for hostile takeovers. 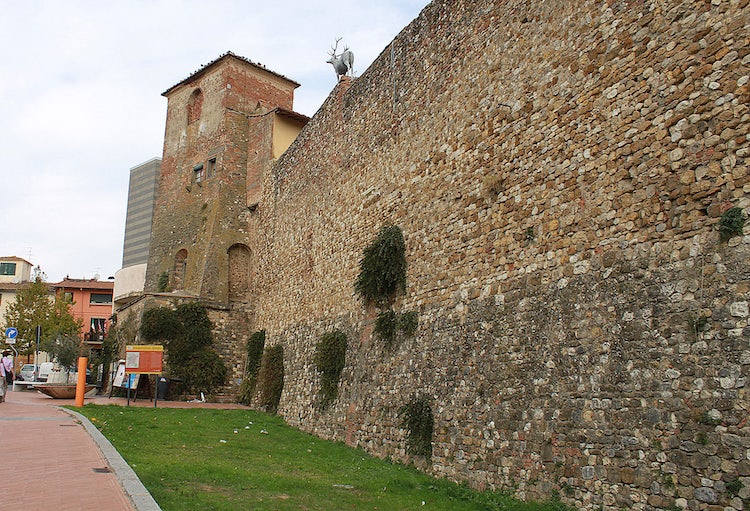 It was until the 1400’s when Florence finally decided that San Casciano needed to be more well endowed, making it an integral part of their defences, did the impressive city walls appear.  These are the very same that you see now as you walk around the city. Like many towns, once peace was achieved between Florence and Siena, the powerful military stance was no longer required thus there was no need to maintain the city. The loss of economic trade which once supplied the military contingency and the activity that surrounded it, slowly ate away at their eco-social prowess until San Casciano became just another little town in Chianti.

Unfortunately, most of the town was destroyed by the retreating Germans and the advancing allies. However, the town quickly overcame this and rebuilt the many churches, homes and streets leaving a small but active community which organizes many events and reinforce many local traditions throughout the year. 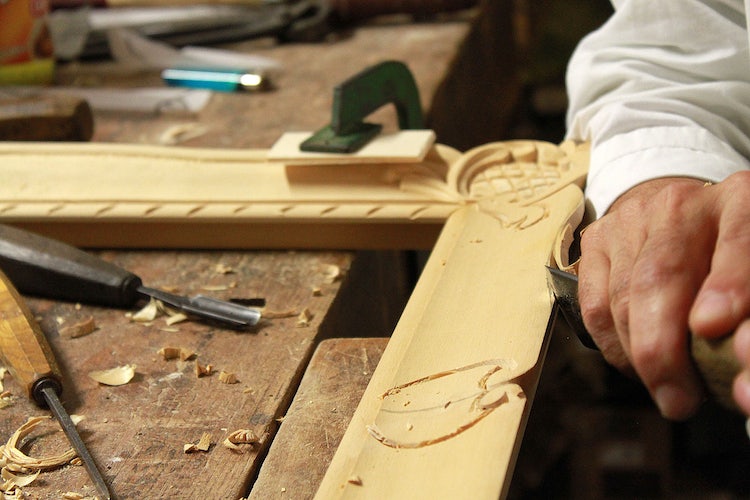 What to see in Town?

The locals know this church as the Suffragette Church, which housed a convent until the nuns were forced to flee with the approach of the Napoleonic armies. Like so many buildings in San Casciano, it was severely damaged in WWII. As you walk up the first step, you are actually crossing what would have been the external wall of the church. The original loggia was actually enclosed, as was the area dedicated to the plebs, whereas the internal part of the church was dedicated to the wealthy patrons and the nuns in the convent. 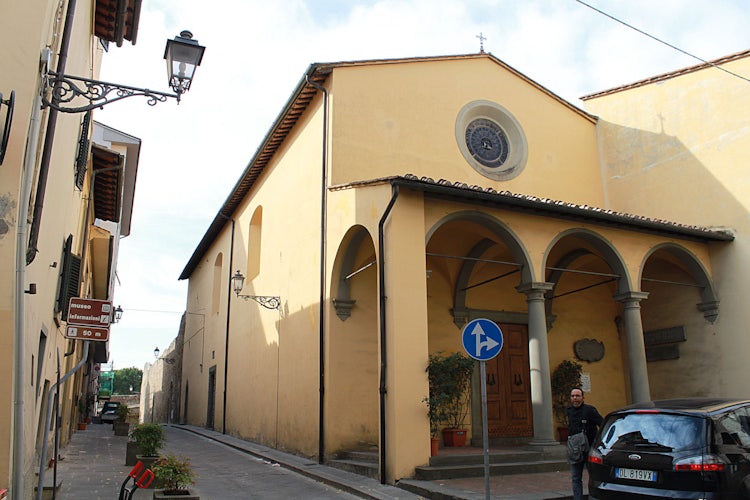 The church and convent, dated in the 1300’s, house a special museum dedicated to the religious artwork from churches within the San Casciano area. We already know that San Casciano was an important religious epicenter and densely populated for the times - with 4 different Pieves (parish churches) tied to it and several other “feeder” churches.  However, even if this wasn't so obvious, the quantity of masterpieces would suggest that the church dominated the area. The artwork is rich and varied, just as were the artists that passed through this area. Since San Casciano was on one of the major roads that joined Florence with Siena, many famous artists travelled through this town leaving masterpieces in homage to the churches.

Or what the locals would call the church of the Misericordia. This small little church with a distinct Gothic facade, is found just inside the city gate towards Florence.  It's size and obscure position would have you skipping right over it except for the fact that it houses some pretty impressive pieces of artwork, namely the Crucifix by Simone Martini, thought to be one of the last pieces he complete while in Italy. It ws recently under restoration.

This relatively new 33 meter water tower, doubles as a modern art show and a panoramic lookout over the Chianti valley. The day I was there, it just happened to be closed but normally it is open at te same time as the other museums.  There is an elevator up to the top floor for a spectacular photo opportunity. There is a combined ticket for the adventure - and on a clear day you can see from the Florentine mountains to Vallombrosa, from the tips of the highest Pistoia mountains to the surrounding Chianti hills and some say you can see as far as the little hamlets that are near Siena - and on an exceptionally clear day even the ocean is visible. 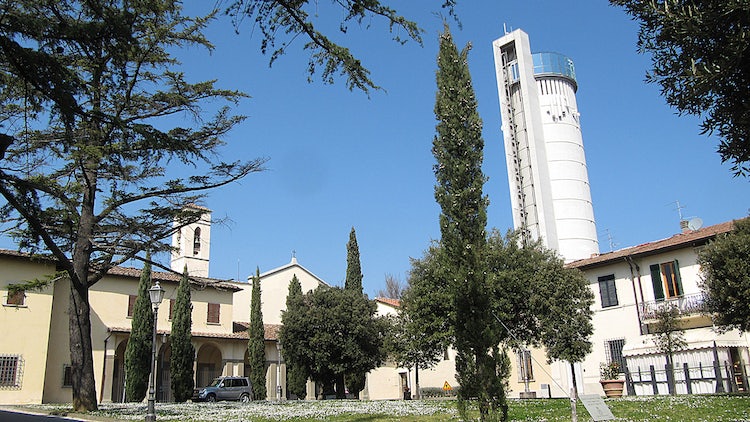 The Antique Walls of San Casciano

San Casciano has dedicated time and resources to create real sidewalks throughout the little town, making it truly a pleasure to walk around and explore. The city walls are parallel with a wide sidewalk where with a leisurely stroll around, you can soak up some of that great Chianti weather and admire the massive city walls. The walls built in mid 1300’s measured 7 meters tall and over 1200 meters in length with two principal gates in the direction of Florence and Siena and two minor gates in the direction of Empoli and a "prato" (a large grassy field). Throughout the city and its streets, parks and cafes you will notice that the architects have managed to mix modern art accents almost seamlessly with the antique structures. A prime example is the statue of a stag (by artist Mario Merz) walking along the top of the antique city walls.

Have a Look Outside

San Casciano is one of the first little towns in western Chianti that you will come upon if you decide to take a day trip outside of Florence, and the perfect stop before heading towards Barberino VP and San Donato.  Here are two places to put on your itinerary for a quick stop as you tour around the Chianti area.

Driving out of San Casciano you can easily follow the indications for the “tomba Etrusca” - though a word of warning there are several archeological digs so, you want to stay on track for the "arciere tomba". There is a small road on the left as you are heading south, where you will also note a sign for the Castello di Bibbione (which is now a resort and wellness center). The sign indicates that is is 2 km to the tombs, and as you start to make the switch backs on the road I am sure you will wonder it meant 2 km in distance or in altitude!

The road climbs fast and steep in the first 1 km...but don’t let this dissuade you. The path that leads to the tomb starts at a small group of houses and church, you will find parking along side the road. 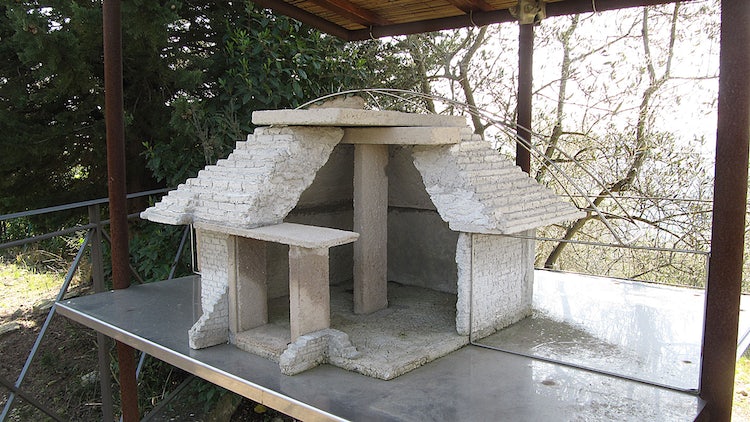 If you ever thought, "I want to stroll among the vineyards and olive groves", then here is your chance. The exceptionally beautiful and panoramic trail that leads to the tomb is half of the fun. The tomb itself is well preserved, with a small 3D model so you can appreciate how it was actually made. This Etruscan marvel was only just re-discovered in 1978, and though already striped of much of its wealth it was still able to amaze with its incredible architectural structure.

My first impression was, this place is “intimidating”. And I must admit - even after visiting it….I still think of it as intimidating.

I mean really, any place that needs a map to help you find the parking lot?? The Antinori cantina has created a mammoth structure that you can visit, tour, do some wine tasting and even enjoy a leisurely meal in the outdoor/indoor restaurant. The enormous (comparatively speaking to the other wine tasting opportunities available) cantina is made of cement, colored rust/orange to emulate the color of terracotta - or possibly the color of aged metal works. In either case, it is carved into the hillside as if the vineyards are slowly taking over this modern art facility.

Once you are inside the structure, it almost seems as if the entire building grew within the hillside, becoming one with the Chianti landscape.  You can visit both San Casciano and this vineyard without a car because the bus leaves you right in front of both (two different stops, same bus.)  Be sure to make reservations for the wine tour - they are very busy and you may not always find space. 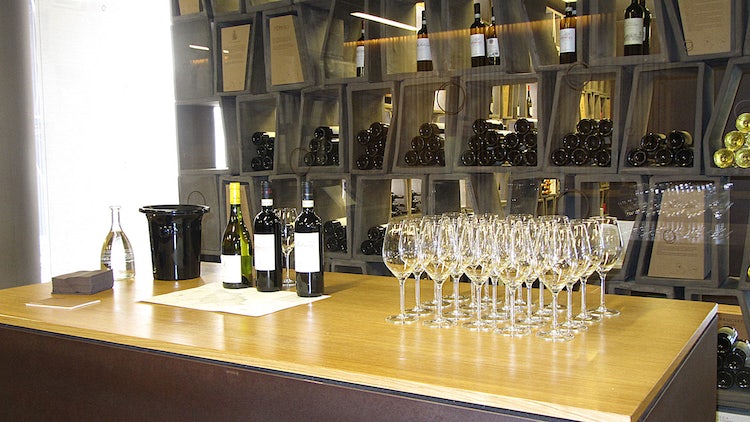 San Casciano is truly a tourist friendly little town - as well as a very “lived” town. Little boutique shops,as well as lots of cafes, restaurants and gelato places line the busy little town center. Especially nice is the large, well maintained and well placed park area for the kids with many games to climb and views to admire for the adults.

Using San Casciano as your base, has you in the middle of practically everything.  A B&B or agriturismo in this area promises great views, the small town experience and fairly good access to public transport and major roads.

Parking is well indicated and there are several parking places close to the city center (paid parking) yet, if you are inclined to walk just a bit, you will find free parking on the outskirts of town. 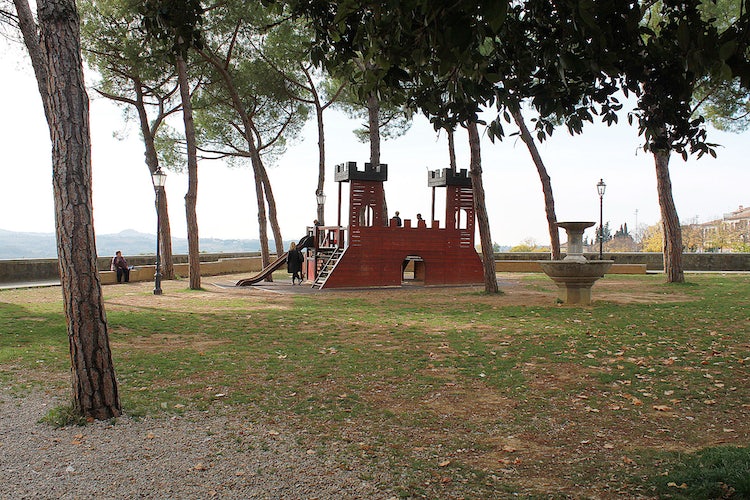 You can easily drive, taking either the via Cassia out of Florence or catching the Florence - Siena highway, exit San Casciano. It is well marked therefore not difficult to find at all. You can also catch the bus  (number 371 timetables) out of Florence which stops by San Casciano - and if you want - will also drop you off directly in front of the cement fortress of Antinori.

Check your calendar, because San Casciano has a pretty busy social life, starting with the medieval Carnival (Spring), the Sepolcro for Easter, where they decorate the two main churches with flowers, Wine tasting in May, Pine Nut Sagra, Rock n’ Roll and a Street Food extravaganza in June, there is a Beer Festival at the end of August and a Wine Festival in September, and finally a Olive oil taste testing in November...among many other events that are programmed throughout the year, particularly in the summer.

Impruneta in Chianti Near Florence, Italy

Just outside of Florence, the town of Impruneta...